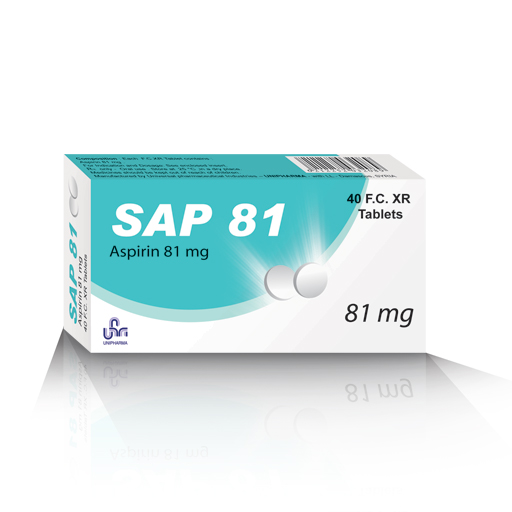 Aspirin is a more potent inhibitor of both prostaglandin synthesis and platelet aggregation than other salicylic acid derivatives. The differences in activity between aspirin and salicylic acid are thought to be due to the acetyl group on the aspirin molecule, which is responsible for the inactivation of cyclo-oxygenasevia acetylation.

Absorption: in general immediate release aspirin is will and completely absorbed from the gastrointestinal (GI) tract, following absorption aspirin is hydrolyzed tosalicylic acid with peak plasma levels occurring within 1-2 hours of dosing.

Distribution: Salicylicacid is widely distributed to all tissues and fluids in the body including the central nervous system (CNS), breast milk, and fetal tissue. The protein binding of salicylate is concentration-dependent. At low concentrations approximately 90 % of plasma salicylate is bound to albumin while at higher concentrations only about 75 % is bound.

Metabolism: After hydrolization Salicylic acid is primarily conjugated in the liver. Salicylicacid has a plasma half-life of approximately 6 hours.

Elimination: Renal excretion of unchanged drug depends upon urine pH. Alkalinization of the urine is a key concept in the management of salicylate overdose. Following therapeutic doses,approximately 10% is found excreted in the urine as salicylic acid, 75% as salicyluric acid.

Vascular Indications: Aspirin is indicated to:

Reduce the combined risk of death and nonfatal Mlin patients with a previous MI or unstable angina pectoris. .

Revascularization Procedures: Aspirin is indicated inpatients who have undergone revascularization procedure (Coronary artery by pass grafting (CABG), percutaneous transluminal coronary angioplasty (PTCA) or carotid endarterectomy) when there is a preexisting condition for which aspirinis already indicated.

Rheumatologic disease indication: aspirin is indicated for the relief of the signs and symptoms of rheumatoid arthritis, juvenile rheumatoidarthritis, osteoarthritis, spondyloarthropathies, and arthritis and pleurisy associated with Systemic lupus erythematous.

In patients with known allergy to non-steroidalanti- inflammatory drug and in patients with the syndrome of asthma, rhinitis,and nasal polyps. Aspirin may cause severe urticaria, angioedema, orbronchospasm (asthma).

Aspirin should not be used in children or teenagers for viral infections, with or without fever, because of the risk of Reye's syndrome with concomitant use of aspirin in certain viral illnesses.

GI Side Effects: GIside effects include stomach pain, heartburn, nausea, vomiting, and gross GIbleeding. Although minor upper GI symptoms, such as dyspepsia, are common and can occur anytime during therapy, physicians should remain alert for signs of ulceration and bleeding, even in the absence of previous GI symptoms

Peptic Ulcer Disease: Patients with a history of active peptic ulcer disease should avoid using aspirin, which can cause gastric mucosal irritation and bleeding.

Sodium Restricted Diets:Patients with sodium-retaining states, such as congestive heart failure or renal failure, should avoid sodium-containing buffered aspirin preparations because of their high sodium content.

Alcohol: patients who consume three or more alcoholic drinks every day should be counseled about the bleeding risks involved with chronic Heavy alcohol use while taking aspirin

Angiotensin Converting Enzyme (ACE) Inhibitors: The hyponatremic and hypotensive effects of ACE inhibitors may be diminished by the concomitant administration of aspirin due to its indirect effect on the renin-angiotensin conversion pathway.

Acetazolamide: Concurrent use of aspirin and acetazolamide can lead to high serum concentrations of acetazolamide (and toxicity) due to competition at renal tubule for secretion.

Anticoagulant Therapy (Heparin and Warfarin): Patients on anticoagulation the rapy are at increased risk for bleeding because of drug interactions and the effect on platelets. Aspirin can displace wayfaring from protein binding sites, leading to prolongation of both the prothrombin time and the bleeding time. Aspirin can increase the anticoagulant activity of heparin, increasing bleeding risk.

Beta Blockers: The hypotensive effects of beta blockers may be diminished by the concomitant administration of aspirin due to inhibition of renal prostaglandins, leading to decreased renal blood flow, and salt and fluid retention.

Diuretics: The effectiveness of diuretics in patients with underlying renal or cardiovascular disease may be diminished by the concomitant administration of aspirin due to inhibition of renal prostaglandins, leading to decreased renal blood flow, and salt and fluid retention.

Methotrexate: Salicylate can inhibit renal clearance of methotrexate, leading to bone marrow toxicity, especially in the elderly or renal impaired.

NSAIDs: The concurrent use of aspirin with other NSAID's should be avoided because this may increase bleeding or lead to decreased renal function.

Oral Hypoglycemics Moderate doses of aspirin may increase the effectiveness of oral hypoglycemicdrugs, leading to hypoglycemia.

Pregnancy: Pregnant women should take aspirin only if clearly needed. Because of the known effects of NSAIDs on the fetal cardiovascular system, use during the third trimester of pregnancy should be avoided

Labor &Delivery: Aspirin should be avoided 1 week prior to and during labor and delivery because it can result in excessive blood loss at delivery. Prolonged gestation and prolonged labor due to prostaglandin inhibition have been reported.

Nursing Mothers :Nursing mothers should avoid using aspirin because salicylate is excreted in breast milk. Use of high doses may lead to rashes, platelet abnormalities and  bleeding in nursing infants.

Rheumatoid arthritis: The initial dose is 3 g a day in divided doses. Increase as needed for anti-inflammatory efficacy with target plasma salicylates level of 150-300 mcg/ml. at high doses(plasma levels of greater than 200 mcg/ml), the incidence of toxicity increase.

Osteoarthritis: Up to (3g) per day individed doses

Arthritis and pleurisy of SLE: The initialdose is (3g) a day in divided doses. Increase as needed for anti-inflammatory efficacy with target plasma salicylate level of 150-300 mcg/ml .

Signs and Symptoms: The early signs of salicylate overdose including tinnitus occur at plasma concentration approaching 200 mcg/ml. plasma concentrations of aspirin above 300mcg/ml is clearly toxic. In acute overdose, severe acid-base and electrolyte disturbances may occur and are complicated by hypothermia and dehydration.Respiratory alkalosis occurs early while hyperventilation is present, but is quickly followed by metabolic acidosis.

Treatment: Treatment  consists primarily of supporting vital functions, increasing salicylate elimination,and correcting the acid-base disturbance. Gastric emptying and/or lavage are recommended as soon as possible after ingestion, even if the patient hasvomited spontaneously. After that administration of activated charcoal, is beneficial, if less than 3 hours have passed since ingestion, it should not be employed prior to emesis and lavage. Hemodialysis and peritoneal dialysis can be performed to reduce the body drug content.