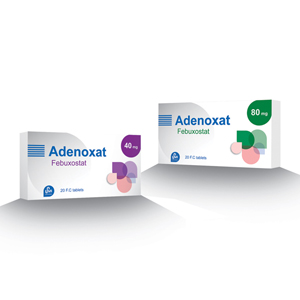 ADENOXAT, a xanthine oxidase inhibitor,achieves its therapeutic effect by decreasing serum uric acid. ADENOXAT is not expected to inhibit other enzymes involved in purine and pyrimidine synthesis and metabolism at therapeutic concentrations.

The absorption of radio labeled febuxostat following oral dose administration was estimated to be at least 49% (based on total radioactivity recovered in urine). Maximum plasma concentrations of febuxostat occurred between 1 and 1.5 hours’ post-dose. After multiple oral 40 mg and 80 mg once daily doses, C max is approximately 1.6 ± 0.6 mcg/mL (N=30), and 2.6 ± 1.7mcg/mL (N=227), respectively. Absolute bioavailability of the febuxostat tablet has not been studied.

Febuxostat is extensively metabolized by both conjugations via uridine diphosphate glucuronosyl transferase (UGT)enzymes including UGT1A1, UGT1A3, UGT1A9, and UGT2B7 and oxidation viacytochrome P450 (CYP) enzymes including CYP1A2, 2C8 and 2C9 and non-P450 enzymes. The relative contribution of each enzyme isoform in the metabolism offebuxostat is not clear. The oxidation of the isobutyl side chain leads to the formation of four pharmacologically active hydroxyl metabolites, all of which occur in plasma of humans at a much lower extent than febuxostat.

The apparent mean terminal elimination half-life (t 12/) of febuxostat was approximately 5 to 8 hours.

ADENOXAT is a xanthine oxidase(XO) inhibitor indicated for the chronic management of hyperuricemia inpatients with gout.

ADENOXAT is not recommended for the treatment of asymptomatic hyperuricemia.

ADENOXAT is contraindicated in patients being treated with azathioprine or mercaptopurine.

After initiation of ADENOXAT, an increase in gout flares is frequently observed. This increase is due to reduction in serum uric acid levels, resulting in mobilization of urate from tissue deposits.

In order to prevent gout flares when ADENOXAT is initiated, concurrent prophylactic treatment with an NSAID or colchicine is recommended.

A higher rate of cardiovascular thromboembolic events was observed in patients treated with ADENOXAT than allopurinol in clinical trials. Monitor for signs and symptoms of myocardial infraction and strokes.

Post marketing reports of hepatic failure, sometimes fatal. If liver injury is detected, promptly interrupt ADENOXAT and assess patient for probable cause, then treat cause if possible, to resolution or stabilization. Do not restart ADENOXAT if liver in juryis confirmed and no alternate etiology can be found.

Adverse reactions occurring in at least 1% of ADENOXAT-treated patients, and at least 0.5% greater than placebo, are liver function abnormalities, nausea, arthralgia, and rash.

Feboxostat alters the    metabolism of theophylline in humans. therefore, use with caution when both drugs co-administered.

USE IN SPECIFIC POPULATIONS

There are no adequate and well-controlled studies in pregnant women. ADENOXAT should be used during pregnancy only if the potential benefit justifies the potential risk to the fetus.

Because many drugs are excreted inhuman milk, caution should be exercised when ADENOXAT is administered to a nursing woman.

Safety and effectiveness in pediatric patients under 18 years of age have not been established.

No dose adjustment is necessary in elderly patients.

No studies have been conducted inpatients with secondary hyperuricemia (including organ transplant recipients); ADENOXAT is not recommended for use in patients whom the rate of urateformation is greatly increased. The concentration of xanthine in urine could,in rare cases, rise sufficiently to allow deposition in the urinary tract.

ADENOXAT can be taken without regard to foodor antacid use

ADENOXAT was studied in healthy subjects in doses up to 300 mg daily for seven days without evidence of dose-limiting toxicities. No overdose of ADENOXAT was reported in clinical studies.

Patients should be managed by symptomatic and supportive care when there is an overdose.

Keep all medicines out of the reach of children.